Anyone who roasts coffee knows that ultimate cup quality from a given lot of coffee is heavily influenced by the farm itself — Mother Nature and farmers working in tandem. But, of course, it is the artisan who cooks up that coffee who can either stand in the way of it's potential, or masterfully unlock the hidden treasure inside. It reasons, then, that the more we understand about a particular bean, the better prepared we are to jinn up a brilliant roast plan.

One of the features that often doesn’t get the attention it deserves is bean density, even though we are usually modestly tuned into it.

Roasters are usually fairly keen on coffees grown at higher altitudes. This is largely because those beans tend to be denser. The cooler weather in higher altitudes, particularly at night, slow down the ripening of coffee cherries. This longer time on the plant translates to more cell multiplication inside the bean, yielding higher density.

Of course, altitude by itself does not dictate bean density. You'll notice this particularly if you are comparing one origin country to another, so it's good to measure it. It might be tempting to ignore this because lab density meters are so spendy.

But, viola! Measuring coffee bean density (or relative density) is not out of reach for any roaster. Below we will outline two crazy easy methods.

But before we get to more scientific measuring, take a look at this image: 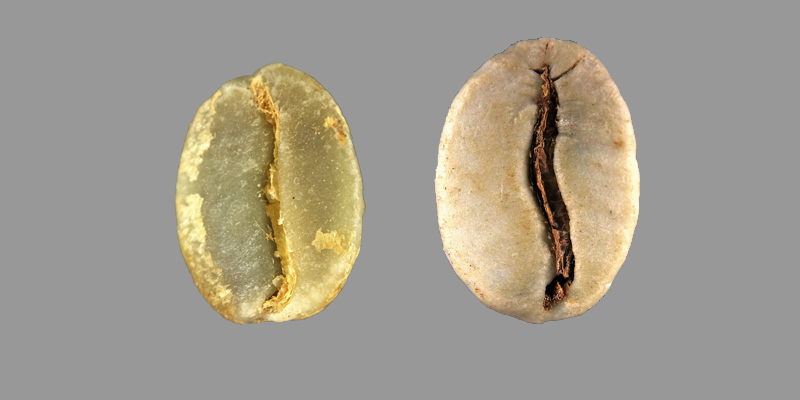 If you look at the two beans above, you can probably guess which bean is denser (exactly, the one on the left). Notice the center cuts of the two. This is a good window into density. The bean on the left has a very tight center cut and it just seems compressed and tight. The bean on the right has a comparatively open center cut, suggesting a more relaxed and open bean. We used our mad-science scale to weigh these and, interestingly, while the bean on the right is quite a bit larger, both beans (coincidentally) weighed exactly the same!

Let’s consider two things things before we get to measuring density:

First, bean density matters. Really, it does. Density simply refers to the concentration of matter in a given space. For green coffee, higher density tells us there is a greater concentration of cells and a more compact cell structure than its lower density counterparts. How that bean absorbs energy, withstands pressure, cracks and develops is going to vary from beans with lower density. (We close this article with a few takeaway considerations for improving your roasting finesse.)

Secondly, for roasting coffee we mostly only care about relative density. In other words, to understand how density influences roasting process and cup quality among various beans, it’s really only necessary to know how density stacks up between each coffee. As an example, if I’m at the gym rounding up some guys for a pickup game of basketball, I’m trying to recruit the players who are taller than the other players…I don’t care to know their actual height.

The point about this all being relative is important because of the two methods of measuring we outline below. The second method is technically more accurate, but the first is easier and generally just as useful. And since both methods reveal how your beans stack up against each other, either works.

Measuring density is about the ratio of mass (in our case, simply weight) to volume. This can be pounds per cubic foot (lb/ft3) or, more commonly in laboratory science, kilograms per cubic meter (or reduced down to grams and milliliters). The second method below relies on water and we note how the metric system displays its brilliance when it comes to measuring water because 1g of water = 1mL of water, which is the same as 1 cubic centimeter of water which means that the density of water is 1g/mL. (And, by-the-way, 1 calorie is the energy required to raise 1g of water 1°C.) Amazing.

To measure the density of green coffee beans, fill a graduated cylinder (tube with measure lines on it) with a known weight of green coffee. Note the volume reading. You can also do this in reverse (as we did) by filling the cylinder to your liking, note that fill volume value, then weigh the coffee. Easy.

You’ll notice that with a narrow, graduated cylinder the beans do not “pack” in all that well and if you took several readings with the same coffee it wouldn’t be surprising to arrive at slightly different readings (it's a good practice to take several readings and average them). Also, the more you fill up the cylinder, the greater the accuracy (we filled it to 100mL, then weighed the coffee). 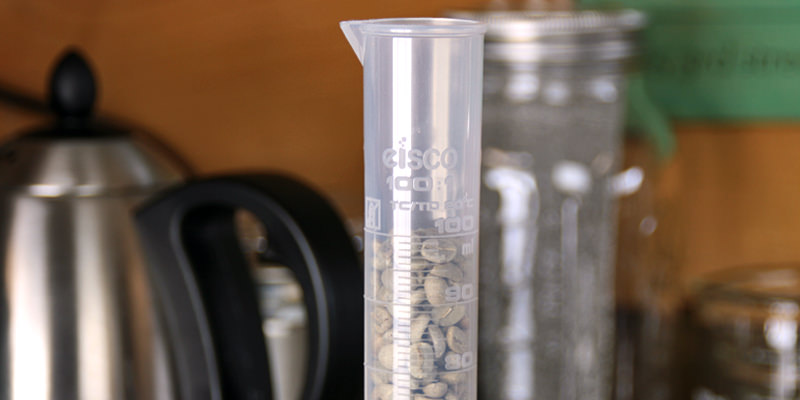 We took some readings of four different coffees in our lab and noted the results below. Again, as you can see, the relative density of these four coffees is noteworthy. Correlation between density and altitude wasn’t perfect, either, as the highest grown coffee (Ethiopia Natural) had the second lowest density readings of this lineup. The only washed coffee in our lineup had the highest density. This is not surprising.

But look at the data. These are material differences. This range definitely shines a light on something that should influence how we approach roasting them (they are listed from lowest to highest density).

To measure the density of green coffee beans, fill a graduated cylinder (tube with measure lines on it) something less than full; note this value. Then add a known weight of green coffee beans to the cylinder and watch the water rise! Now, simply subtract the original water volume reading from this new water volume reading and this net value (difference) is the amount of water “displaced” by the beans — how much volume the beans occupy in the cylinder. 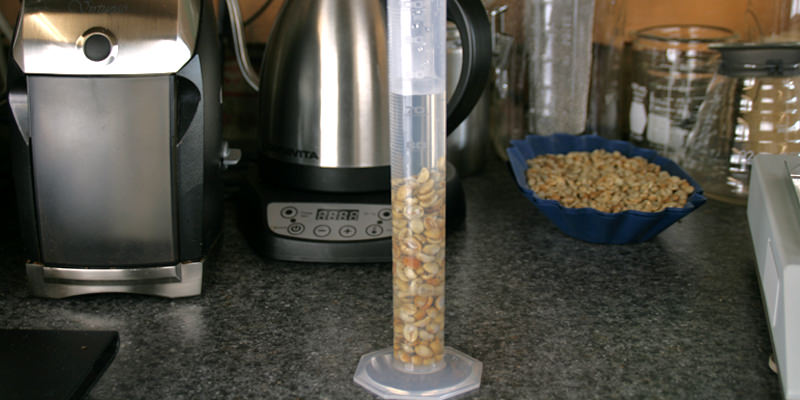 This way of measuring bean density is fairly accurate. Since the water flows in between all the beans, we have a very good read on the actual volume of beans in the cylinder. The downside of this method is that we just trashed 30g of green coffee—and if we’re measuring the density of that pricey Geisha…

Notice the difference from the reading of the same coffee above! This sets up our closing two points.

First, pick one method of measuring density and stick with that. You won’t be able to accurately compare one bean density to the next if you’re mixing techniques because the "displacement method" will always yield higher (more accurate) values than the “freely settled method." Again, the density measurements from the displaced water method versus the settled volume measurement of the Thailand coffee above (.626 g/mL and 1.176 g/mL, respectively) is huge. The second reading is almost 80% higher!

Secondly, keep track of this data in your roast log. If you don’t maintain a roast log, start maintaining a roast log. Seriously. The value of being able to go back to your notes and figure things out is an invaluable tool for ongoing learning and pinpointing why something went so well…or so poorly. You can begin to answer that elusive, “why did this second roast batch of that same damned coffee come out so flat!?”

Here’s a roast log sheet we put together for our use. Our actual “log” is a file containing these roast sheets and cupping score sheets for all our coffees. I can almost promise you, if you retain notes, you will reference them!

As you roast with density in mind, here are a few basic considerations for how density influences roasting:

As we noted above, dense beans have a tighter, more complex cell structure. This structure packs in more potential for sugars and acid to develop during a roast;

Denser beans are going to conduct heat more efficiently and will usually roast a little faster;

Soft beans may take longer to roast, and with heat transfer taking place within the bean more slowly, higher roasting temps may lead to scorching and other uneven results (see our article on roasting naturals which tend to have lighter and more varied density).

So, density alone will not drive your roast plan, but it should definitely be something that influences it. Again, the more diligent you are in recording your roast data, the more you will learn about how the many variables play a role.

Note: For the freely settled method described above, you don't really need a graduated cylinder. You can use any straight-walled cylinder such as a piece of pvc pipe with a base on it. You simply need to know how many mL of water that vessel holds. If you choose to do this, aim for a larger diameter (up 3" or 4" and maybe cut to 4" to 6" in length) for more consistent results. Fill it to the brim with water and weigh the contents, remembering that mg of water = mL of water. Write this mL number on the pipe and that is your constant reference. Then, proceed as described above by filling the pipe flush with green coffee, weighing the coffee, then dividing that weight by the number of mL of water the pipe holds. That's your g/mL density value.